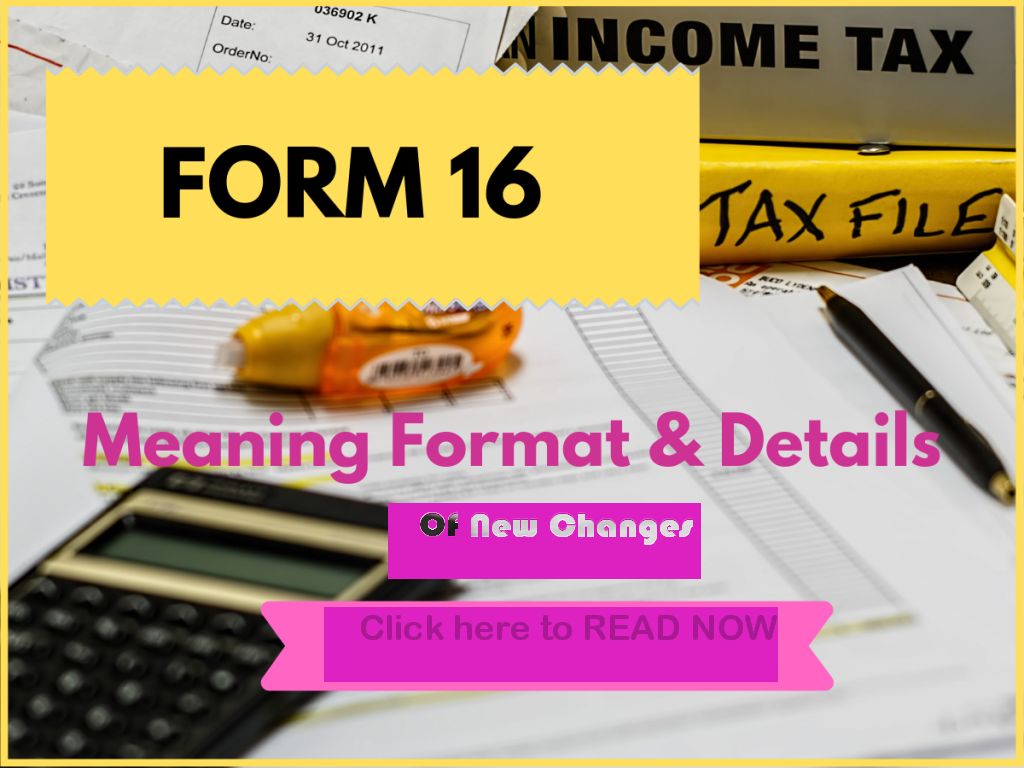 Fudging income, tax breaks gets tougher with the New Format of Form 16

A new format has been notified by the CBDT for Form 16, which is the salary TDS certificate. It would be requiring an in-depth break up of any tax-exempt allowances which have been paid to the employee as well as the various tax breaks that have been claimed by the employee. The previous format of Form 16 permitted companies to provide consolidated figures or a break-up in diverse formats for both the aspects, thereby leaving a bit of vagueness with regards to the individual composition.  Read in detail about the new format for Form 16.

Simultaneously, changes have also been done in the TDS Return format (this includes the TDS details from the salaries of employees’) which are filed by companies with the income tax department. This permits the tax authorities to cross-check the ITR, Form 16 of the employee’s and the TDS return of the company quite easily.

In the previous year, tax authorities had identified numerous cases where a few employees had made false claims related to huge income tax refunds. This might be the other reason why the streamlining process is being done, in order to get rid of any such scheming in the near future.

The new format of Form 16 will enable the income tax department to have a look at the detailed break-up of both the income as well as the tax breaks which are claimed by a salaried individual in the first check itself. Thereupon, any inconsistency in between the income as well as the deductions that have been indicated in Form 16 and the ITR which has been filed by the individual can be identified instantly. The new format might help the income tax department in automating the process of cross-checking the figures as well because it removes the freeway that companies had earlier in terms of giving the break-up of both the income and deductions and also fixes the format to provide these details.

In a notification dated April 12, 2019, the Central Board of Direct Taxes (CBDT) notified the new format of Form 16. This new format would come into effect from May 12, 2019. This date is way before the last date to issue Form 16 by employers. Post this, Form 16 will have to be issued in the new format itself.

According to the notified changes, the Form-16 which will be issued by the employer will be required to mention the nature of the tax-exempt allowances which have been paid to the employee. “The earlier Form-16 format did, However, as per the revised new format, the employer will be required to be specific about the nature and the number of allowances which will be exempt from tax. Similar details have to be provided for in the ITR-1 of this year” says Abhishek Soni, CEO of tax2win.inc – a website for tax-filing. The new format gives a complete list of allowances like travel concession or assistance u/s 10(5), house rent allowance u/s 10(13A) and similar allowances which are exempt under the Income Tax Act.

Earlier, there were no specific formats to report the tax-exempt allowances. The recent changes that have been implemented in the Form 16 format are”

1. A detailed break-up of various tax-exempt allowances like HRA, LTA 2

Chandak also mentions, “In previous years, there were many situations where the department of tax identified many cases of fraud, wherein few tax professionals assisted taxpayers who were claiming exorbitantly high refunds by false claims. This is why the tax department has made similar changes in Form 24Q – TDS return in order to bring a consensus across all the information sources. The intention is to track and identify the tax evaders who opt for illegal means to reduce their tax burden.”

In the recent revised Form 24Q, it is compulsory to provide the PAN of the lender in case of any deduction claimed with reference to housing loan obtained from a person other than the Employer or a Financial Institution. Earlier, this was not mandatory.

Form-16 will now also give the break-up of every tax-related deductions u/s  80C to 80U which you have claimed from the salary paid by the employer. “Similar to the tax-exempt allowance, the previous Form-16 format mentioned the total amount of deductions which were claimed by the employee from the employer, as per chapter VI-A of the Income Tax Act. The new format will also give a detailed break-up for all the deductions that are being claimed”, says Soni.

Wadhwa says, “Similar modifications have been done related to deductions under Chapter VI-A along with losses under the head house property. These changes would make sure that companies follow a common structure for TDS certificates and employees will find it easy to file a tax return on the basis of TDS certificates. Also, it confirms that the deductions and exemptions that are claimed by the employees in the Income-tax return will match the data  present in the TDS certificate”

This also indicates that if in case of any additional tax break or deduction which is being claimed by you while you file the ITR ( this means amounts beyond the ones that are claimed against your salary income from your employer), the tax department will be in a position to immediately identify the extra claim. Soni advises that in case you have a deduction that is not being claimed via your employer but is being claimed while you file the ITR, make sure you have document proof for the same in case the tax department has any queries regarding the claim.

According to Wadhwa, in case an employee received a salary from his previous employer or any other employer during the previous year and the same amount has been reported for the purpose of TDS to the current employer, then a separate reporting is needed for this kind of salary income in the revised Form 16. In addition, a standard deduction which was announced in the Budget of 2018, has been included in the revised Form 16 under the head – Deduction under section 16.

According to Shalini Jain, Tax Partner of People Advisory India, EY India, the revised Form also needs one to report the total salary amount which has been received from other employers as well. Another interesting point in this revised format is related to the non-salary income which could be declared by the employee to the employer has now been limited to only income from house property and other sources. In the previous version of Form 16, the employee could declare income from capital gains as well to his employer for the purpose of deduction of taxes at source. Changes are also done to include rebate u/s 87A as well as standard deductions from income from salary. Similar necessary changes have been made to the TDS returns which the employer has to furnish every quarter. The annexure which requires details of salary that has been paid or credited during the financial year has also been modified and has to report in-detail data on exemptions of Section 10 as well as deductions of Chapter VI-A.